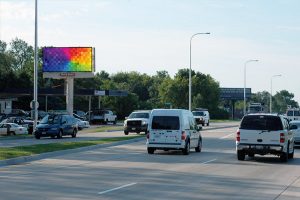 More than half (55%) of travelers who noticed a digital billboard in the past month were highly engaged, recalling the message on the screen every time or most of the time they passed by a digital billboard. More than eight out of 10 (82%) recalled advertisements in the last month, 35 percent noticed AMBER Alerts or missing children alerts, 24 percent recalled community information, and 18 percent noticed weather alerts.

“This detailed study highlights the effectiveness of digital billboards for businesses to communicate with consumers and for communities to reach the public,”said OAAA President & CEO Nancy Fletcher.“Consumers are paying attention to the information presented to them and acting on it, whether they are drawn to a location featured on an ad, discussing the ad with
friends and family, or attending an advertised event.”

“Digital out of home is part of advertising’s future, and digital billboards offer brands a quick and flexible solution to target today’s mobile consumer,” said Stephen Freitas, OAAA chief marketing oficer. “Communities are impressed by the medium’s ability to drive awareness and business.”

Commissioned by OAAA, the report analyzed 1,256 online surveys with US residents age 18 or older who lived in and around five major cities – Atlanta, Cincinnati, Minneapolis, Phoenix, and Tampa.

Respondents were screened for having traveled on speciffed roads containing digital billboards within the past 30 days. Ad recall was tested for 30 OOH advertising campaigns running on select digital billboards in these markets (six brands per market).

Nationwide, there are 6,100 digital billboards, according to OAAA.