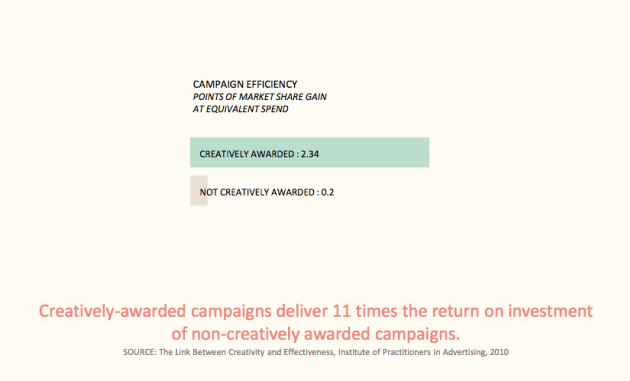 Creative ads boost market share and revenue.  The OAAA put on an outstanding July 25 webinar by James Hurman titled The Case For Creativity.  Hurman is a media planner and consultant who’s written a book on the subject.  Here are three takeaways from Hurman’s talk.

There’s a link between ad creativity and effectiveness. Creative ads generate an 11 times better result than other ads even when you control for total ad spend and other factors. The landmark 2010 study by the UK’s Institute of Practitioners in Advertising found that creative ads resulted in a 2.34% increase in market share versus a 0.2% increase in market share for ads campaigns which weren’t creative.

Creative companies outperform non-creative companies in the stock market. For the period from 1999 the S&P 500 grew 7%/year. The Cannes creative market of the year companies grew 26%/year during the same time period.