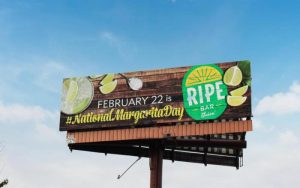 Marketers, both national and local, are increasingly combining mobile with OOH assets as it is an innate part of the “outside the home” experience — plus both are steeped in location. Specifically, 68% of mobile use is done on the go and 70% of a consumer’s day is spent outside the home. Better yet, research from Ocean Neuroscience shows that consumers are 48% more likely to click on a mobile ad after being exposed to the same ad on OOH first. This natural synergy is one of the main reasons we have seen over 1,000 clients​ on the Outfront Mobile Network over the past year. The pairing just makes sense.

In today’s smartphone infiltrated world, OOH doesn’t need to work harder, just smarter. Earn the attention of your desired audience and they will find you. Two studies show OOH’s effect on search activations. First, Omnicom Group’s Benchmarking reported that when added to the media plan, OOH increased search’s RROI by 37%, further solidifying the power of the two mediums. The second study comes from Nielsen and shows that 46% of those exposed to an OOH ad searched for the brand over the past six months. For this reason, we have seen an influx of startups using the Outfront platform to gain general market awareness and subsequent customer acquisition.

Lastly, OOH is a great driver of social activity. In the same Nielsen study, OOH’s effect on online activations across Facebook, Twitter and Instagram was measured. What they saw was that OOH delivered more online activity, per dollar spent, than any other offline medium. In fact, when activation was indexed against media spend, OOH performed nearly four times the expectation. The number of social activations has also increased since the last study was conducted in 2013. Today, social media integration is table stakes for brand stories communicated through the Outfront platform, whether it be through aligning with a #NationalDay, a social influencer or directly incorporating a Snapcode into the creative. Here at Outfront we have seen the same trend on a ca​​mpaign level. Specifically, we see elevated social conversation surrounding the location of a campaign.

The power of OOH in driving online action is the reason that 25% of the top OOH spenders come from the tech/digital category. This research simply proves what we, and many of the brands, have felt all along. Now that the science has caught up with the gut feeling, we can officially state that first comes love, then comes the happiest marriage on the block — OOH and digital media.